“Two thousand years of history could not be wiped [away] so easily,” Bob Marley – Zion Train

EVERY BLACK PERSON in early and ancient history was a slave or descendant of a slave, if we agree with the popular narrative and ignore the widespread evidence of blacks’ accomplishments since antiquity. To buy into the notion that black history begins with slavery and ends with struggle, is to recognize “white supremacy” as the authority on human existence, past and origin. “If you do not understand White Supremacy, what it is and how it works, everything else that you understand will only confuse you,” wrote Neely Fuller in 1969.

Much confusion surrounds the history of black people. Partly due to their lack of self-knowledge and disconnect from oral tradition, and partly due to foreign ideas promoted in U.S. literature and mass media. For instance, the Out of Africa theory introduced in the 1980s suggest that “hominids” or “great apes” developed in Africa and then spread out about 200,000 years ago. This implies that all humans are of African descent, and that black Americans are not the only “African Americans.”

An analysis of DNA taken from a 60,000-year-old skeleton found in New South Wales in 1974, revealing an older and distinct genetic line, challenges the Out of Africa theory. “Modern humans didn’t just come from one area, they came from all areas,” lead researcher at Australian National University Alan Thorne said. “What our evidence shows is that the situation is much more complicated than any of these supporters of Out of Africa would have imagined. We simply say that here we have a form much older than anything found in Africa and there’s no evidence that it, or the skeletal anatomy of the fossil that it comes from, ever had anything to do with Africa. In fact, the skeleton looks very much like slightly earlier fossils that we know were in China.”

Clark University anthropologist Alexander Chamberlain reaffirmed the results of the Australian scientists, writing in 1911, “We can cross the whole of Asia and find the Negro again.” 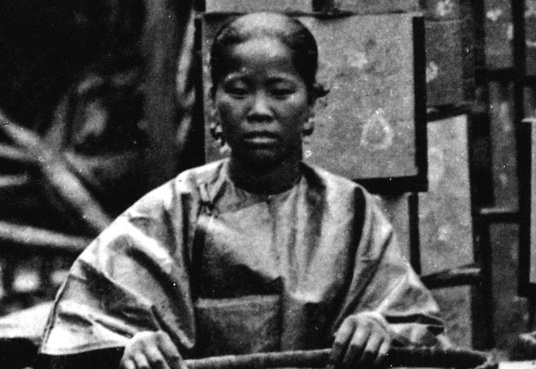 In discussing the subject further, he relates “That the black man should have contributed in the slightest to the common fund of our human civilization is a thought quite foreign the minds of some Americans afflicted with acute Anglosaxonism and Negrophobia. No amount of evidence would e.g., convince Mr. Thomas Dixon, Mr. Thomas Watson, or Professor W. B. Smith, that the Negro has done anything decidedly and recognizably human during the long millenniums of his existence as a race. That the world must be white, by hook or crook, is their motto, and they seek to persuade themselves that it always has been so.” Chamberlain also makes mention of Sakanouye Tamuramaro, a black general of Japan, blacks in “many high places” in the history of Europe, and Estevan the Moor, who spent six years among the Indians in Louisiana, and discovered New Mexico and Arizona in search of the Kingdom of Cambodh, called Shamballa, Cevola or Cibola in some writers.

According to A New Dictionary, Spanish and English (1726), “Cibola is a province of North America, north of New Mexico, not well known as yet, as not quite subdued by the Spaniards.”

Dr. Leo Wiener, of Harvard University, in his book, says, “The chief cultural influence was exerted by a Negro colony in Mexico, most likely from Teotihuacan and Tuxtla, who may have been instrumental in establishing the City of Mexico.” Teotihuacan is also known as the abode of Gods.

Weiner, like Constantine Rafinesque who wrote in 1828, observed that black colonists dominated America from Canada in the north to the Maya, Aztec and Inca civilizations in the South. This is true, as we know, the first colonist and “slaveholder” on record in American history is listed in the Virginia Muster-Roll of 1624 as “Antonio,” with “neger” in the notes column. Neger, and its many variants, as well as Antonio are not of English or Spanish origin, but Indian.

The oldest advanced civilization in Central America has been credited to the prehistoric Olmecs, known for seventeen gigantic stone heads currently in Mexican museums. Ever since the first one was exposed near La Venta in 1862 by Mexican scholar José María Melgar, certain scholars have hotly debated their “Negroid” features. Melgar wrote: “I was struck with surprise; as a work of art, it is without exaggeration a magnificent sculpture, but what astonished me was the Ethiopian type represented. I reflected that there had undoubtedly been blacks in this country, and that this had in the first epoch of the world.” 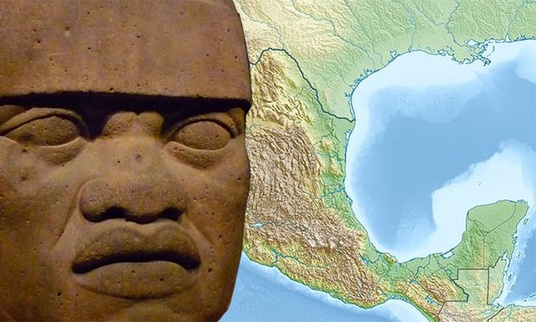 Similarly Mexican historian and military leader Vicente Riva Palacio echoed in 1870, “It is indisputable that in very ancient times the Negro race occupied our territory.” Below are photos from the ancient Maya archaeological site called Bonampek in the Mexican state of Chiapas. 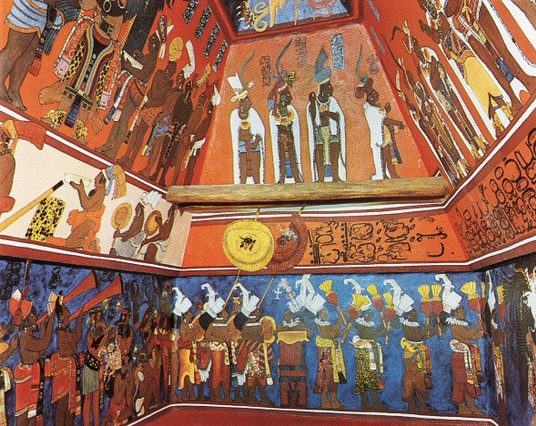 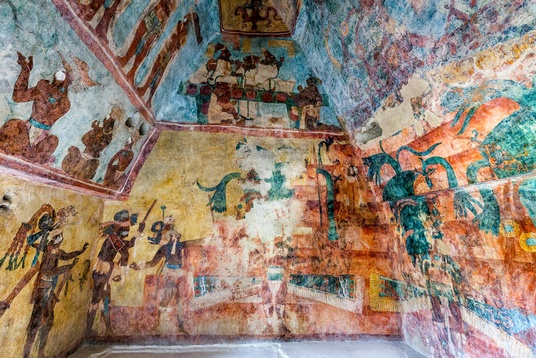 From anthropologists to archaeologists and historians up to the 20th century, that fact that all black people are not of “African” origin was no “ancient Chinese secret.” The scholar Constance Irwin reported in 1962, that “anthropologist see distinct signs of negroid ancestry in many of the New world skulls.” Observations supported by numerous preColumbian anthropological finds throughout America and her surrounding islands. A fact so frequently referred to in the writings of the French historian Constantin-Francois de Chasseboeuf (Volney), that his contemporaries believed it solved the identity of the Egyptian Sphinx. During his visit to Egypt in 1787, Volney described the Egyptians as a “copper-colored” people. 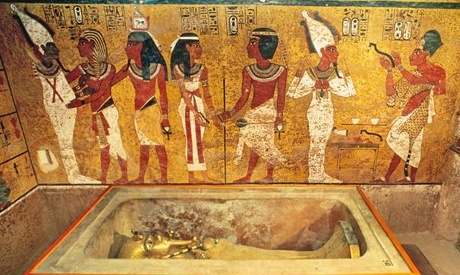 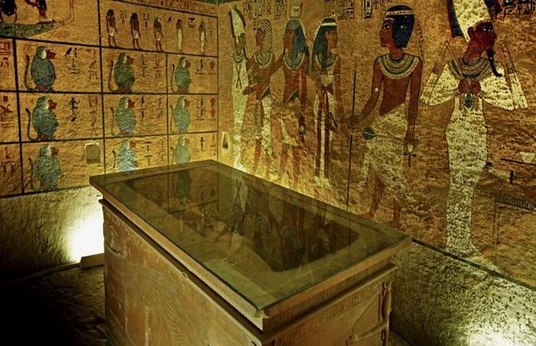 MacRitchie says, “In addition to the black, or brown, and yellow races already spoken of as pre-historic Europeans, there is a theory that a copper-coloured race, closely akin to some branches of American Indians, once inhabited Europe, or rather the southern parts of Europe, and North Africa. Proof of this are said to be visible in the complexion of the modern Copts, which is reddish, and of the Nubians, who are described as, of a deep red colour.”

Noah Webster, in his Dictionary of the English Language (1828), defines American: “A native of America; originally applied to the aboriginals, or copper-colored races, found here by the Europeans; but now applied to the descendants of Europeans born in America.”

It is true, that Martin Luther King, Jr., Frederick Douglas, Dr. W.E.B. Dubois, and other intellects all spoke now forgotten words that American was the homeland of the American Negro. “One hundred years later,” declared King, in his famous speech of 1963, “the Negro is still languished in the corners of American society and finds himself an exile in his own land.”

Rafinesque, who was chosen by Thomas Jefferson for the 1806 Red River expedition in the Louisiana Indian Territory, fearlessly explained that the suppression of black history was intended to “to grasp the whole continent, and make these fragments of nations alien on their own soil, or to annihilate them at last.”

With all that said, we come to another Black History Month. The question that faces us today is whether or not Black History Month is still relevant since it was first celebrated by educators and students at Ohio’s Kent University in 1970? Is it an affective vehicle for change, as some pretend and others would like to believe? Or has it simply become the month for the social engineers and propagandists behind mass media to sustain the long-held delusion of white supremacy and black inferiority?

Let’s consider the fact. Black History Month focuses on a select group of men and women associated with black slavery, oppression and struggle—that is, the War Between States or Civil War (1861-65) and the Civil Rights (1954-1968) eras. This covers a mere 14 years in which the black slave theme is solidly planted in the minds of school children who accepts their inferior history as the limit of their future possibilities. Hence, Morgan Freeman referred to Black History Month as “ridiculous,” and cited, very justly, that “black history is American history.”

The professor Black Studies at Brown University Rhett Jones put it this way in 1972, “Americans must understand the focus here is on what white historians who wrote between 1858 and 1969 have had to say about Blacks who lived in the colonial period. The works of these historians may be generally characterized by what has come to be called racism.”

In the words of the brilliant entrepreneur and historian Dr. Carter G. Woodson, co-founder of the Association of the Study of Negro Life and founder of Negro History Week, first observed in 1926: